Like all Melbourne residents, 2020 was a difficult year with over 100 days locked down and isolated for that time.

Fortunately, in the months prior to the lockdown I had taken the opportunity to ‘dabble’ with the thought of making my first scratch-built radio-controlled model. Inspired by a friend in Sydney, Dave Glasson who has makes ‘perfect’ scale replicas of boats and ships he has worked on as a Navy conservator, I wanted my model to be:
• A functional replica of an existing boat.
• Made from the same materials as the original boat.
• Be able to ‘pass’ as an ornamental model while having good waterproofness.
• Small enough to store in my study.

My choice was to build a 1/8 scale replica of my own mini tugboat Mars, using similar methods and scaled drawings to the original boat.

The preparation for the model saw me visit Float-a-Boat model shop prior to Christmas 2019 to show Adrian Brewer what I planned. He suggested that to continue on with the hull I had started and plan where the components could be mounted in the most waterproof places and then return to place an order. To do this, I did internet searches of components ie. battery, RC receiver, electronic speed controller, electric motor and servo motor. The search enabled me to get sizes of components and make small cardboard boxes to represent the components. With the boxes, I was able to decide where the components could be mounted while I was making the boat parts.

With Christmas 2019, I was blessed with a Float-a-Boat gift certificate from my dearly beloved. In January I visited Adrian again with the carcass of my hull and I bought the essential radio control components, shafting and rudder.

The end of January and the whole of February was then spent in Vietnam with Hanh, returning to Australia just as there was talk of a COVID lockdown.  During the dark days of lockdown, the construction started in earnest. I completed the hull which was mostly made of 6mm and 3mm marine ply left over from making full size Mars. There were some challenges in making the back swept stern and I made and tore down this a few times before I settled on the correct shape crafted with strips of balsa and filled with fairing compound then strengthened with Botecote epoxy. The gunwale was also a challenge, made of 6mm marine ply and filled with fairing compound. I found the best way to critically check the shape was to sit the hull next to the television so that when watching the TV, I would periodically look at the shape and pick any obvious faults in shape or proportion.

Midway through the build, I needed to buy more fittings from Float-a-Boat during the lockdown, so the on-line catalogue was useful for this as I could just email my order to Rhonda and she would send the fittings in the mail.

The full assembly of the model often needed finishing prior to assembly as some parts would have been hard to sand and paint etc. after assembly.  A few changes to the design were needed to allow access to the functional radio control components.

The model had sea trials in the laundry basin when I completed the hull and again in the bath when I fitted the radio control equipment. I also fitted ballast to correct a list while in the bath. Final sea trials at Albert Park Lake on a WBA sailing (thanks to Graeme Signorini for moral support in driving). I drove the model at top speed which turned out to be a comparable top speed to the full-sized Mars (slow) for 1.5 hours and I found it a relaxing way to be on the water.

Mini Mars still requires some finishing (flags, lettering, outboard head, helmsman and passenger, chairs and table), but is by and large complete. Overall, I found some of the fiddly parts such as window frames difficult to make and stick to the bulkheads and like with full-sized Mars, I made many of the parts more than once. I have decided my fingers seem to be too short and too fat and as a wood worker I make a good fitter and turner.

All up, the project gave me something to think about apart from the COVID news and I have gained the experience of making a scratch model with radio control gear. 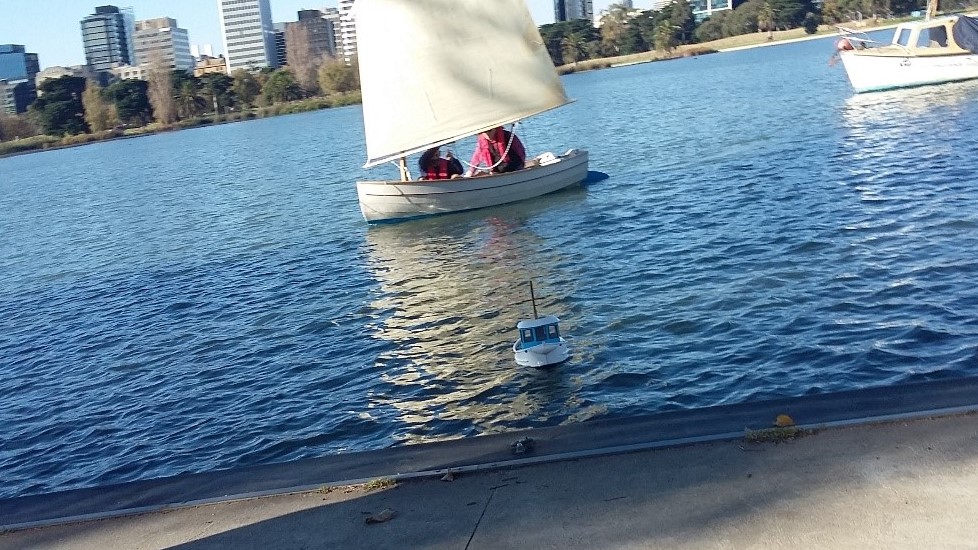