Boats and Waterways of Bangladesh - Part I

by David N. Webb, skipper of the Yawl Mariko

Bangladesh may not be the first place that comes to mind when discussing the building of traditional timber boats. However, when I went there in December 2019, I found that stepping on and off boats of all kinds was part of daily life there. Bangladesh is a country of waterways: everywhere land and water are interspersed at regular intervals and, aside from urban apartment dwellers, the lives of the majority of its hundred and sixty-three million people are to some extent amphibious.

A myriad of vessels ply their trade on Bangladesh’s rivers, constituting the world’s largest fleet of inland vessels according to Strauss (2016). These range from steel ships that might look at home in the commercial docks of Melbourne, were it not for their somewhat lesser size, down to slender traditional fishing boats, smaller than a canoe, upon which the locals manage to stand and cast their nets with an incredible degree of balance and confidence.

In Bangladesh the time-honoured method of constructing a wide variety of traditional wooden craft has best been preserved, with a living museum of master craftsmen having been established by a local woman named Runa Khan, for the teaching, preservation and documentation of the traditional boat construction techniques (Strauss, 2016), using traditional hand tools.

In this series of short snippets from my travels I will attempt to describe some of the many vessels I saw there, especially the more traditional wooden ones, including enough of a narrative to convey some feeling for the waters on which they cruise.

Shortly after arriving I bought a motorcycle using a local smartphone app, where it cost me somewhere a little over three hundred Australian dollars. It was a two-stroke, hundred Yamaha RX-100, and although somewhat underpowered for the combined weight my companion Jahanara and I, it bore us along at as fast a speed as anyone could safely hope to achieve in the congested and chaotic traffic conditions of Bangladesh, where a large proportion of the vehicles are pedal-powered rikshaws. Not half a kilometre from the place of purchase it developed a fuel leak from the carburettor, but one of the many roadside mechanics fixed that for a further two dollars and so we were on our way and set off for our first little exploratory outing, from Narayanganj to Sonargaon, to see the ruins of the old capital and the beautiful gardens and ponds. 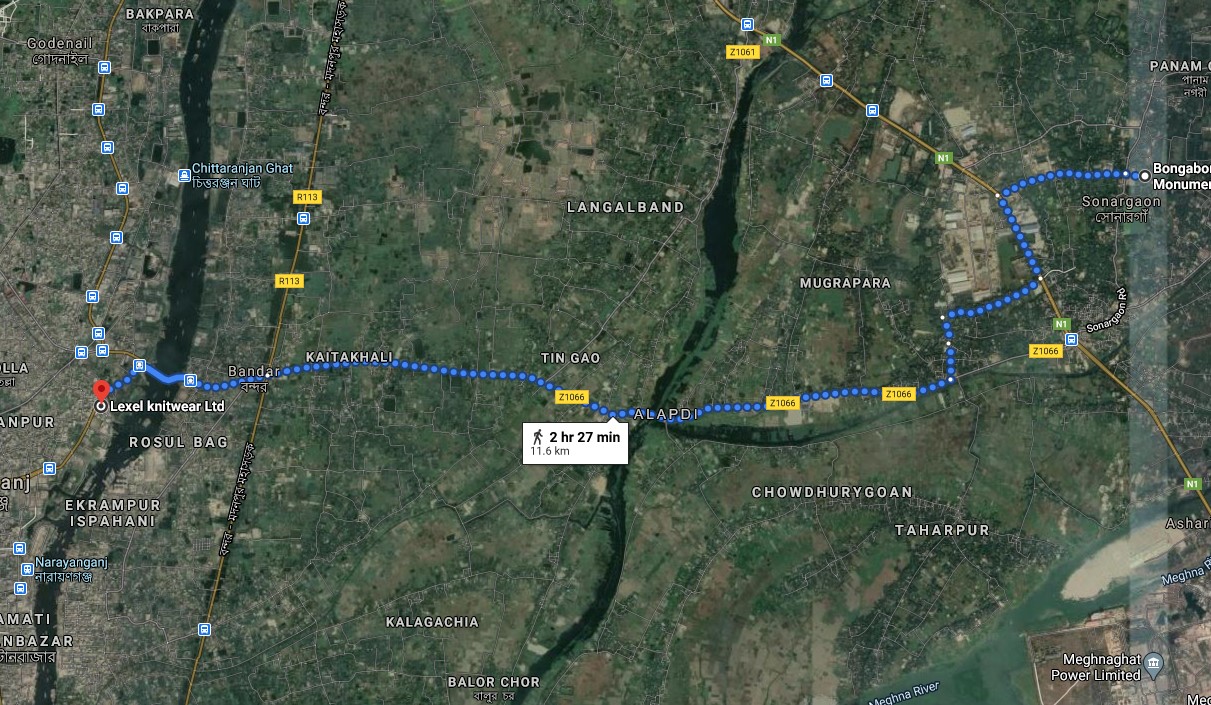 Figure 1: The route we took

About half a kilometre from home, we came upon the Shitalakshya River near Narayanganj; a brown expanse of water two or three times the width of the Yarra. The river is so named because the word Shital means cool and clean. In a bygone era the water used to be good to drink and was said to taste slightly sweet and rumoured to cure all illness. Now, however, it is lined with Narayanganj’s famous textile factories, where many of the famous brand garments of the world are manufactured by multinational corporations. The jobs they bring are of some benefit to the local economy, but unfortunately they release dyes and other chemicals into the Shitalakshya River to the extent that fish caught in it are said to smell like petrol and are no longer considered edible, which has ended what was previously a major form of food production. Gazing into the murky waters, I certainly didn’t feel inclined to take a drink.

Here we rode the motorbike onto a slightly rusted car ferry, driven by cables, where the ferryman relieved us of a few taka and we began to rumble out across the brown water accompanied by twenty or thirty traditional timber boats with curved bows, generous beam but very little freeboard once loaded. About half of these had diesel engines and the others were propelled using a sweep over the stern. Those with an engine typically had no rudder and were steered with a similar oar or sweep.

The deck of each of these vessels was crowded with a great number of people. I was informed by my companion Jahanara, who sat behind me on the motorcycle that, in the boatmen’s eagerness to accept money from passengers, these boats were often overloaded and capsizes were common. When I pointed at one of the vessels and asked what kind of boat it was I was told, “engine boat” and when I pointed at another operated with a sweep she replied “traditional boat”. As best I can ascertain, these are a local adaptation of the sampan, common across China and Southeast Asia, whose name is said to come from the Chinese word 三板 (san ban), meaning three planks (Online Etymology Dictionary, 2021). This name is a reference to their construction, which consists of a single wide plank as a bottom and two slightly narrower ones for the sides.  On this occasion, all made it across without any incident besides being honked several times by an enormous barge, laden almost to the gunwales by an enormous ridge of what looked like bricklaying sand, that passed just ahead of our ferry as we crossed.

Once off the ferry we passed through the merry town of Nabiganj and on across small farms of flooded paddy fields, interspersed with ponds and smaller rivers crossed by bridges. This went on for some time until we emerged onto a long, gently rising bridge with timber rails that spanned a river slightly less wide than the Shitalakshya, but utterly incomparable in that everything about it was clean and fresh and incredibly beautiful. This was the Brahmaputra River. Although small by Bangladeshi standards, this river is still used for commercial shipping. As evidence of this, an enormous steel ship (fig. 4), barely visible in the distance, was somehow perched improbably high up the west bank, perhaps having been deposited there when the river was in flood.

We stood atop the bridge for some time, gazing at the beauty of the place. We were passed by a number of barges, similar to those that had passed us on the ferry earlier. These, I observed, were built of steel plates, painted with eyes and various other decorations, and steered by means of a long tiller atop the deckhouse aft of their open cargo hold.I was looking down at a pond heron and trying to photograph it in among the lilies when Jahanara tapped my arm with some excitement and drew my attention to two men aboard what she informed me was the most traditional of local fishing craft. Long and narrow, despite being fashioned from rough timber planks, the vessel moved through the water gracefullyand was sufficiently stable, balanced by the counterweight of the paddler astern, for the man in the bows to stand comfortably as he cast his net. The sight of him doing so was truly a wonder to behold

I thought at first that Jahanara’s referring to the boat as a ḍiṅgi must surely be her attempting to translate the name into English as dinghy. However, I later came to research this further and found that in fact the reverse is true. The word dinghy in English is itself, according to the Merriam-Webster dictionary and other sources, a loan word picked up by the British Royal Navy during their colonisation and trade in the region and is an anglicisation of ḍiṅgi, subtle variations of which are used in Bengali, Hindi, Urdu, Telegu and other languages used in the Indian subcontinent. In these languages it means not just any small boat but specifically on of the same construction as that which is depicted here, since there are other terms for similar but slightly different small boat designs, such as those I will mention in parts 2 and 3.

The ḍiṅgi is, as shown in Figures 7 and 8, pointed at both bow and stern. According to a survey of vessels in the Bay of Bengal (Bay of Bengal Program, 1985) the construction consists of strengthened by both ribs and cross beams, the latter of which can be seen in Figure 7. They state that specimens of this construction type ranged, at that time, from five to seven metres in length and were propelled by sail, oars or both. They state that common construction timbers for these boats include sal teak and jarul, which are described in Figure 9. These vessels are sometimes decked in over the crossbeams, with split bamboo a common decking material. This form of decking does not form a watertight compartment, but raises goods and occupants out of any bilge water that may be present. Their use in rivers and inland waterways means they are unlikely to encounter any substantial waves other than wash from passing barges.

The ruins of the old capital were haunting and the nearby water gardens were home to many birds and quite tranquil despite the timber Ferris wheel that had been set up to entertain crowds of shrieking and children. The timber rowing skiffs for hire on the ponds were of unremarkable plywood construction over a light frame and unlikely to have represented any local tradition in boat construction. So we returned that evening the way we had some, enjoying every moment of the journey, but seeing no more that was remarkable in terms of boats.

Coming soon:
Part 2: The Sundarbans
Part 3: The Indian Ocean and a trip to Coconut Island