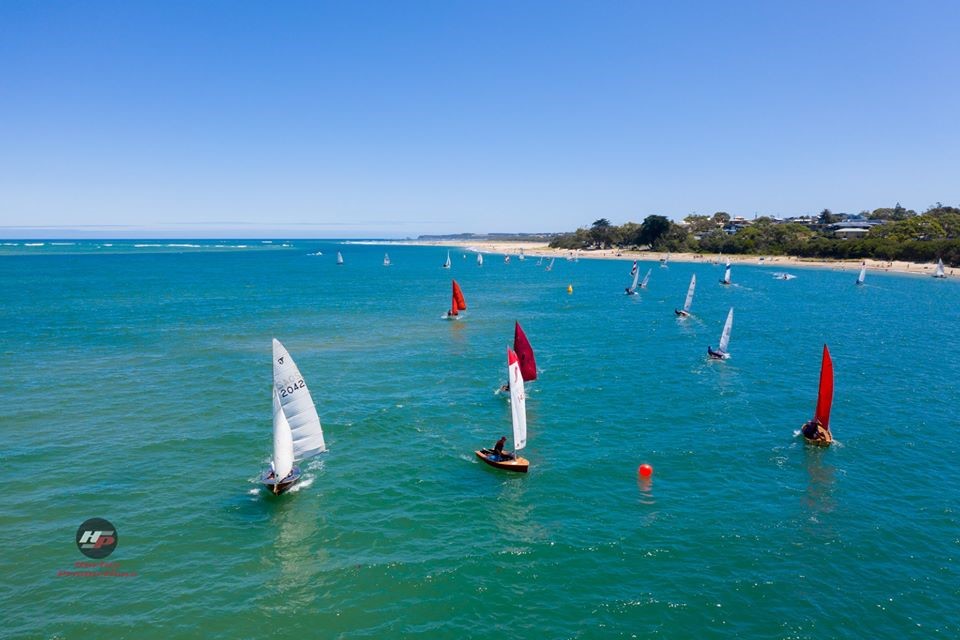 The South Gippsland Yacht Club has now successfully run seven Australia Day Regattas celebrating the wooden racing and cruising dinghies of our recent past. Well, at least most of us sailing these boats consider the 1960’s and 1970’s to be the recent past.

This was the first year that the number of entries did not exceed the entries in the previous year. The small decline from 60 entries to 55 was attributed to the bushfires over the preceding weeks and some nervousness about visiting Gippsland, even though the nearest fires were over 200 kilometres away from Inverloch. The weather favoured the regatta yet again with good sailing breezes for all three days. The shifting sands and the tidal currents provided the usual challenges to those who sail on Anderson’s Inlet.

Variety is the essence of the regatta with social events on and off the water, racing events, novelty events and displays of models and vintage skiffs in the stadium, however the key focus is the variety of boats that are brought to the club yard and the beach for sailing out on Anderson’s Inlet.

To begin the catalogue of unique boats at the regatta, sailmaker Mark Rimington brought his St Kilda 8 foot skiff named “Keith” for its first time in the water since its extensive restoration. Once a popular class at Albert Park Lake and the old St Kilda skiff club, Mark’s boat is probably the only one still sailing. Built by Mouldcraft using the same hotmoulding process as our Port Phillip 12, this boat looked stunning with its varnished topsides, new deck and original Tasker sails. A perfect Aussie skiff in miniature. “Keith” was a handful to sail even for Mark, a champion sailor, and he said he has a spinnaker belonging to the boat that is yet to be hoisted!

Reuben Kent is a young boatbuilder who has worked with Tim Phillips at the Sorrento Wooden Boat Shop and now works at the Maritime College at Launceston. He sailed his Arch Logan designed Silver Fern class  “Gussie” for the boat’s second appearance at the regatta. The class is well known in New Zealand where Arch Logan was a legendary designer and boatbuilder. Reuben completed an extensive restoration of the boat a few years ago and sailed the boat hard in the regatta races (to the point of a capsize in the Sunday race). This is a brilliant example of a traditional carvel planked, copper fastened racing class dinghy.

Greg Barwick, a WBA member, is one of the enthusiastic instigators of the revival of the Australian Sailfish class. A class that was thought to be no more has made an astounding comeback with numerous boats now sailing – and racing – in three states. The Inverloch regatta, and Greg, have been central to this miraculous resurrection. The winner of the Best Sailfish award, Peter Weiss came from Cairn Curran Yacht Club (where he is Treasurer) with his newly restored “Fish and Chips” to enjoy the competitive racing against some of the Sailfish champions of the past. There were 10 Australian Sailfish on the water at this year’s regatta.

WBA founding member Roland Johnson, who died last year, designed the Fairy Penguin dinghy as a simple training dinghy for easy kit construction. He sold the plans and kits through his business Marine Timbers in Mulgrave. Graham Sibson brought along his neat and original example of the class and sailed it in the regatta race. The regatta aims to bring rare boats out of sheds and garages and onto the water, and it is great to see another example of a rare class sailing in a good breeze with the other boats of its era. The WBA has a set of plans for a Fairy Penguin dinghy (see David O’Dempsey).

This is just a sample of the boats which I thought were particularly interesting.

The eclectic collection of boats made a great spectacle on the inlet for spectators on the shore and for those circulating round the course in the regatta races. If you wish to see more, go to the South Gippsland Yacht Club website and view the videos created by Oliver Hartas who makes his living travelling the world making videos of yachting events. Most of the photos in this article are also by Oliver Hartas.

There will be another regatta next January with a collection of interesting boats. Who knows what we will see next year. The only way to see the whole list of entrants is to be there. Hope to see you there.