The 54th International Mirror Class Australian Championship was on after Christmas, and Daniel, my fellow Mirror sailor at Altona, was keen. We invariably fight it out for second last place in the local club races, but perhaps we could get lucky and come maybe third last for a change.

I wrangled my Mirror 57868 (circa 1977) onto the roof of the car, hitched up Daniel's 15823 (circa 1969) on a trailer behind, Daniel hitched up his splendid 10 foot Franklin caravan as our accommodation, and we headed down to Paynesville.

The Championship was hosted by the hospitable and wonderfully efficient Gippsland Lakes Yacht Club, organized in conjunction with the Mirror Class Association of Australia. I think 16 Mirrors entered, 10 mostly fibreglass in the serious Racing Division, and 6 all wood construction in the more relaxed "Jib and Main" (JAM) Division.

We managed to sail four out of the five possible days, missing by general agreement the 45 degree day. On two days the wind was gusting over 20 knots. Anyone familiar with the Lakes will know the water there gets mighty choppy when the wind gets up. The starts were close and hotly contested, and the racing serious but good humoured. Some of the sailing was what the English adventurer Alastair Humphreys describes as "Type 2 fun" - the sort of fun you have when you are wet, cold and maybe a bit frightened, but which takes on a golden glow when you survive and talk about it in the bar afterwards, all warm and dry. But most of it was good old Type 1 fun, thoroughly enjoyable in the moment. 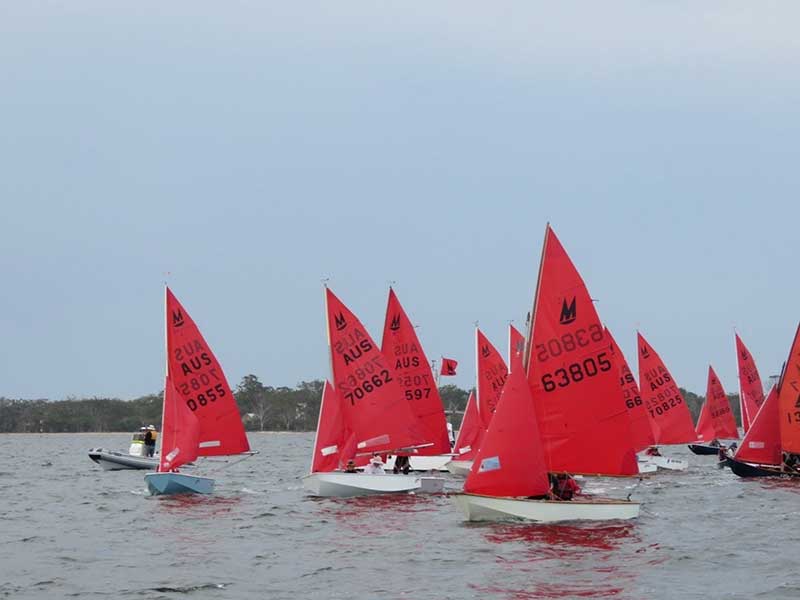 Starts were hotly contested …
Photo posted on the Mirror Victoria Facebook page by Christie Arras from GLYC, who was out every day in the rescue boat.

The bar for entry for the Jib and Main division is not high. "As long as it has red sails," I was told when I worried that my Mirror might not measure up. The winners of the JAM Division had only acquired their Mirror a few weeks before the event, and the restoration only got as far as the undercoat. There was a good age range. The skipper of the JAM Division winning boat was 10 - nothing like getting thoroughly whopped by a 10 year old. I believe the oldest participant was eighty something. There was a nice, family friendly vibe around, and the kids and teenagers seemed to be having a great time. Us older persons got on ok too. I met some lovely people, learned a lot and improved my sailing skills under the watchful eye of the GLYC rescue boat. I never did manage to finish better than second last on the water, but given there were only two other single handers, largely by turning up, completing the course, and not breaking anything, I won the Mirror Single Handed Champion 2019/2020. I doubt I will be heading to WA to defend that title, so it is wide open for 20/21.

I know there are at least a few WBA members with Mirrors tucked away in sheds or under tarpaulins. I would encourage anyone who has a Mirror or who can get hold of one to give the upcoming Mirror State Championship (probably towards the end of this year) a try, I guarantee it will be all sorts of fun.

Mirrors are great little boats, and events like this offer the opportunity for a unique experience.