Further to my earlier story of ‘rescuing my holed boat’, Hanh and I remained camped at a secluded boat ramp on the Murray River for a couple of days, so were casual observers of what seemed to be a daily pattern. We mostly occupied ourselves reading, collecting firewood and I picked up ancient rubbish, dropped by earlier visitors and watched the occasional river traveller pass.

The boat ramp was well provided for by council, having not only a double paved boat ramp and carpark but a large free undercover BBQ area, environmental toilet, rubbish bins and a bush BMX bike track, a bit of grassed open space and lightly forested space.

For such a secluded place we were surprised to find a variety of visitors to the ramp, visiting for many different reasons.

At around 9 in the morning there seemed to be a constant procession of what appeared to be locals in their cars. Some distance out of Moama, they would not have been within the council rubbish collection zone, so they routinely pulled up next to the rubbish bin and offloaded household rubbish.

From mid-morning, cars would stop, and people to go through the rubbish in the bin to collect aluminium cans to cash in, in NSW.

At lunch time, a mini bus would arrive from a special school, staying just long enough for a bite to eat.

Every early afternoon, a police car would drive through at almost blistering speed. One day, I was quick enough to flag the NSW Police down. I told them about the damage caused to my boat by the wake of a speeding boat, with their claim that they were unconcerned with anything on the river unless there was a death. By the speed of their exit, they were determined to do nothing.

By after school time cars would turn up with kids and bikes and good use was made of the bush track.

Late afternoon after work knock off, cars with tinnies would arrive, quickly launch, racing into the distance for a quick fish – no longer than an hour. Quickly reload the tinnie on the trailer in enough time to be back home for dinner I suspect.

Early one afternoon a really flash car with tinnie turned up. It was a fishery patrol. They changed into their uniforms in the carpark, launched their boat and sped up river, returning a few hours later.

The last morning, we were at the boat ramp, my lift turned up for me to collect my car and trailer at our start point, Tocumwal. With the weather looking threatening Hanh and I decided to leave the tent up, so Hanh could have some shelter if needed. When I arrived back at the boat ramp, I quickly loaded Mars on the trailer. While I was doing this NSW Parks officers turned up. They began to ask me about why I was camping in a no camping area. I explained how there was no signs about no camping but was told the signs are on the main road. I then explained how I hadn’t been there as a matter of choice and showed them the damage to my boat, also mentioning I hadn’t entered by road to see any sign. They must have been satisfied and left shortly after.

Who would have thought there would be so much action at this secluded boat ramp? 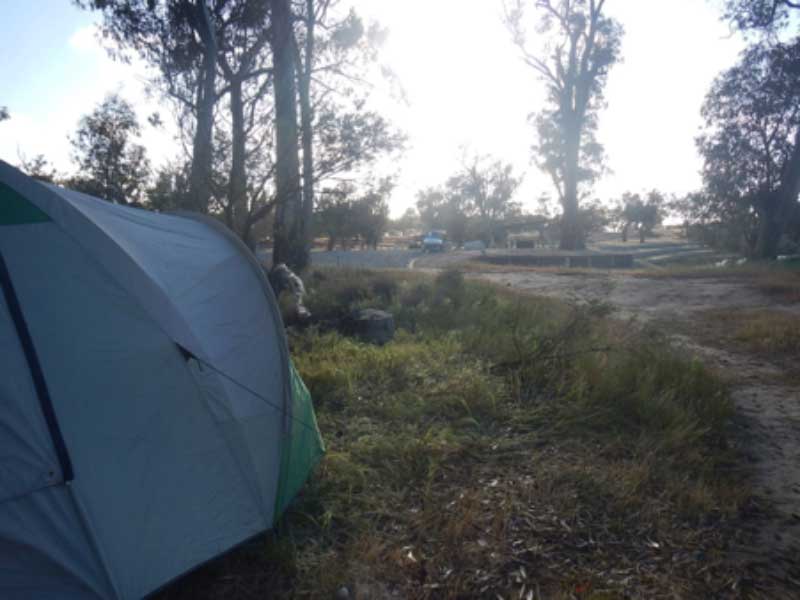 Camp setup. Mars is in the distance on a friend’s trailer. 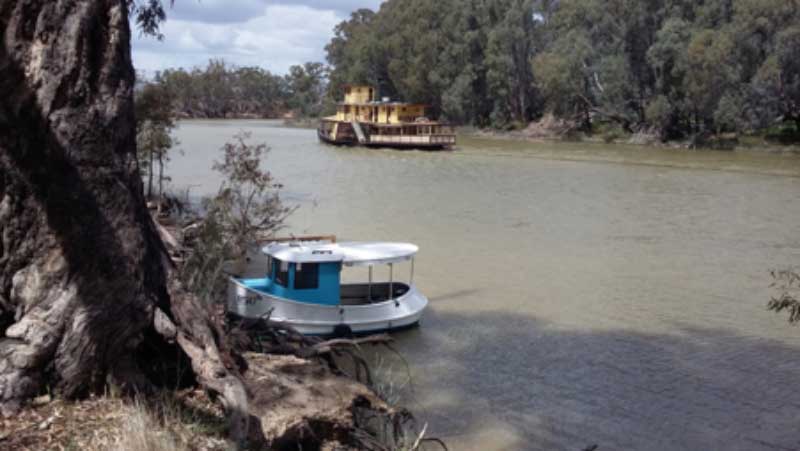 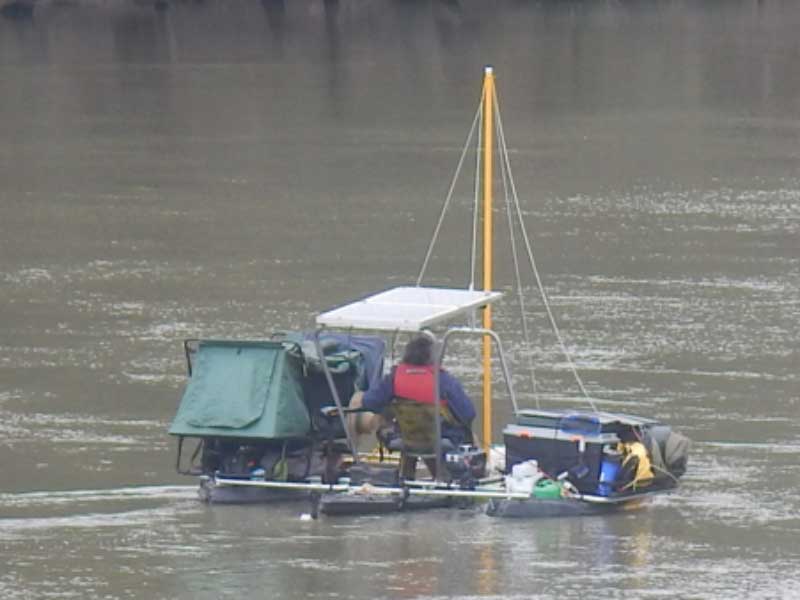 A minimalist river traveller. The trimaran was powered by an electric trolling motor, charged by solar panels.
He had sleeping accommodation in his swag. He was a very slow traveller, literally crawling pace.