My Tennessee (Jessie II) was built by Duck Flat, Mt Barker, SA; the first owner had it on display at Goolwa (as Janoralee). I have felt morally obliged to exhibit in every rally since I bought the boat: 2005-19, with only 2017 missed (I was overseas). I have had troubles with moorings in Goolwa wind, and one year the grand parade organisation failed.  Hence I went without a boat once, and displayed on the trailer once.

In 2011, a friend crossed the lake solo in a similar Tennessee (Moonshine). In 2013, I crossed in Jessie II with a Goolwa friend as deckie, part of a fleet of about eight vessels accompanying paddlesteamer Marion. It was an uneventful crossing, and a great achievement.  Hence, I won't repeat it in my boat (a possible anticlimax), although I have skirted the lake when in a rally circumnavigating Hindmarsh Island. This year was the best of my seven: organisation has been improved, and pier repairs have been undertaken.  The weather was kind for Saturday and Sunday.

Stage one was a River Murray Boat Owners Association rally in February.
I trailed across from Mildura (my summer base this year), then launched early.  On Thurs.21.2.19, I went up Currency Creek to the head of navigation. On Fri.22.2.19, I went up Finniss River to the head of navigation. About eight boats assembled at the pumpout jetty (a floating concrete one,offering shelter). 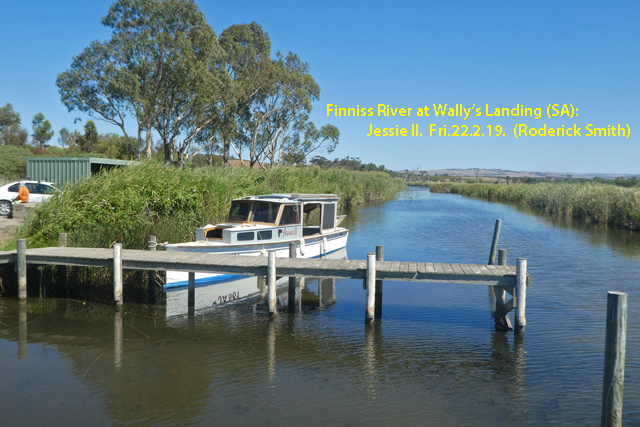 On Saturday, the rally went through the lock to a lunch caravan on the ocean side, before the rivermouth.  Coastguard was warning boats with deeper draft not to go through.  Dinner that night was at Goolwa Hotel.

On Sunday, the rally went to Clayton Bay for a barbecue lunch, then back to Goolwa to disperse.  I trailed via dinner at Langhorne Creek Hotel to Greenings Landing Marina. While I was in China, the marina repainted the antifoul and main hull.

Stage two was an advance adventure. PS Marion has attended the rally for years, but was not allowed to carry passengers across Lake Alexandrina. My early memories are of waking on Monday morning as Marion whistled out on first light to go home.  I would rise later, come out of the water, trail to Wellington for lunch, and watch Marion go by.

In 2013, Griff Rhys Jones (from the BBC series 'Three men in a boat') was guest of honour at the festival, and was made a crew member for the crossing.  He conducted the official opening, and competed in the rough & ready.

In 2015, Marion was granted permission to carry passengers with three main rules: it had to carry solas life rafts, the forecast wind had to be below a set figure (20 km/h?), the total complement (passengers and crew) could notexceed 40 people.  I grabbed the chance, and booked for northbound.  I had been by steam over the two river sections (aboard Industry), so my deckie took my ticket for two day sections: Goolwa - Clayton Bay and Murray Bridge- Mannum; I had the main crossing, with a couple of cruisers running parallel.  They pitched more than I had 2 years earlier. I had friends on the 2017 northbound: it had to delay for a day on wind hold.

For 2019, I booked with deckie Steve for the full Mannum - Goolwa, filling a small Marion gap (the second half of the day to Murray Bridge). We boarded just after lunch on Mon.22.4.19.  I knew most of the crew and some of the passengers from earlier adventures.  The run to Murray Bridge was in magic weather.  PV Mayflower has been restored by the same group, and would cross in tandem.  It was slower (8 km/h vs Marion's 10 km/h), left earlier, then was overtaken.

Its first adventure after restoration had been journeying to Wentworth for the 2017 Junction Rally.  Tuesday was similar, with a mid morning late start to an afternoon finish at Wellington.  There we were joined by the 1920s cruiser Ione (a replica of an 1880s), 1940s RAN patrol boat (modified to cruiser) Bincleaves, and modern cruiser Jabiru (owned by Tim and Anne of WBASA, and whom I met when they took Argus across as part of my 2013 fleet; they had also taken cruiser Orana and vintage wooden speedboat Morgan on rallies which I had attended).  In 2013 we left an hour before dawn, for first light when leaving the channel markers; this time we left on first light to give better sighting of badly-placed fishing nets.  The crossing was as angelic as mine had been.  A couple of Goolwa cruisers met us at Clayton Bay. We were into Goolwa at around 14.45, then returned by bus to collect our cars.

Stage three was my positioning.
We had tail lamp trouble on Wednesday night, and delayed until that could be fixed on Thursday.  We then paused at Milang.  The gamble nearly failed, there was a strong breeze and mild chop at Goolwa.  We launched at the Aquatic Club ramp, and got the last spare berth at the pumpout jetty in vanishing light, now comfortable and secure.  Overnight the wind got stronger.
Friday is usually the day for boaties: people arrive progressively, and we get to admire each at leisure and catch up with friends and conversation. However, the wind deterred many from arriving before Saturday.  The floating pontoons for small boats would be brought onto the site until late afternoon (in use for yacht racing until then).  Marshalls asked small boats not to launch until Saturday.  Some of the fleet arrived, but most boats with local moorings held off.  Lots of other preparations happened through the day: the council removed the wires along the boardwalk; tents were set up; trailers were positioned.  On Thursday and Friday, the tourist railway had steam trains running for holiday traffic.  We had a friendly barbecue for boaties that evening.

Stage four can be covered by the others.
Andrew had brought Mars; David had brought Curlew.  I went aboard Mayflower for the grand parade, but perhaps only one third of the fleet did (too hard to redock).

Stage five was my departure.
I joined Sunday's grand parade, which concludes the main program.  Nearly all boats go back to home moorings at the end.  We had only about seven boats left at the moorings overnight.  My plan had been to go for a day along the Coorong, sleep overnight, then return next day.  The wind forecast was ferocious.  We went through the lock, past the mouth, up Mundoo Channel, across to the ocean side, back through the lock before lunch, then ambled through the marina canals.  We saw RMBOA friends at home, and paused for lunch with them, then back to the pumpout jetty so that I could walk to the library.  We were now the only boat there; the displays had gone; a huge contrast from the activity only 24 h earlier.  We came out of the water at dusk, cooked our own dinner, and continued to Mannum for 23.00.  This had been the best of my Goolwa rallies: helped by the organisation, the weather, my mooring and by knowing so many people already.  I'll be back in 2021. 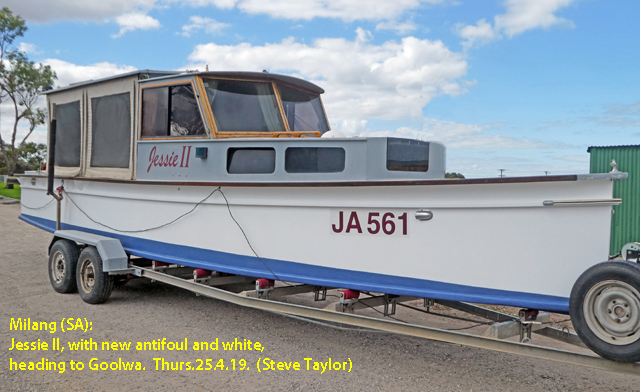