This was the best attended Club Night for some time, attesting to how well known Dugga Beazley is in the boating scene on Port Phillip Bay. Dugga’s wife Frances and daughter Karen were in the audience to prompt him on a few occasions and to emphasise the family’s ongoing involvement in commercial fishing on the bay. In fact his family has generations of experience in boats and fishing on Port Phillip. 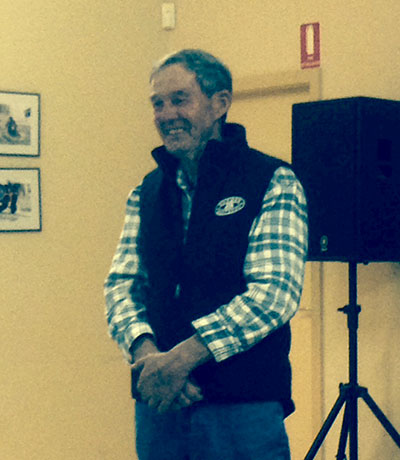 he stories he told ranged over the period from World War II to the present. He remembers a time when Port Melbourne lacked any hint of gentrification, Sandridge was a fishing village and Fisherman’s Bend deserved its name. Dugga described the Port Melbourne of his childhood as “a bit of a wonderland”.

This was a time when 20 fishing boats worked out of the Port Melbourne lagoon and the bay produced huge hauls of fish that sold for prices like 2/6 lb. (That’s 25c for 500g if you are under 60).

He told of anchoring one afternoon off Point Cook and watching a tightly packed school of snapper swim past that continued for over four hours. Many thousands of fish were in that phenomena they called the red tide.

Dugga has played an ongoing game of cat and mouse with the authorities. Having two boats with the same registration number seems to have been part of the strategy. When his boat is reported fishing where it should not be, he could point to his boat undergoing maintenance on the hard with the reported rego number.

Some years ago he and his son David nearly lost their lives in an incident off Point Wilson. Their tinnie broached in heavy seas and both of them were tipped out. The boat drifted away and they just managed to swim to a channel mark. Clinging to the pile, they were slowly succumbing to hypothermia. A fisherman spied them from the shore and launched his boat to rescue them. They were both shivering uncontrollably when they reached the warmth of a fire in a house ashore. In typical spirit, once they were warmed up they retrieved the tinnie and went back to fishing.

The double ended 27ft Port Melbourne couta boat Volunteer has had a long association with the Beazley family, beginning with Dugga’s father. After being taken over by Sorrento Sailing Club as their rescue boat for a while it was fortuitously discovered lying in a container yard in a neglected state.
Dugga restored Volunteer to her former glory and raced successfully in the Sorrento Couta boat fleet until they enforced rules against boats being engineless.

There are many more stories that Dugga could tell. Tim Horton and Andrew Cohen are recording the history of Port Phillip Bay’s boatbuilders and fishermen. Dugga has a prominent and fascinating part in this story.

You can also find more about Dugga in Afloat magazine May 2012 edition. It’s online at www.afloat.com.au.