Another cold and windy evening was braved by an intrepid group of video devotees numbering 14 with Jenny Chinn ensuring that "the boys" behaved themselves. 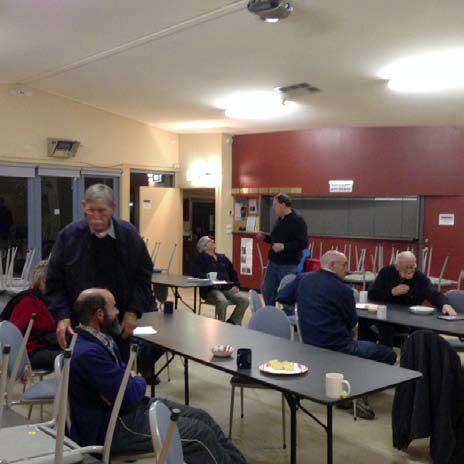 APYC also had a meeting the same evening so the two rooms were well used with Paul Taig from APYC joining us after their meeting for the second video (and supper).

The first video was Garry Kerrs Maritime History Series "The Couta Boat" which ran for 110 minutes and covered the evolution of the boats  / fishermans stories / boat building / the Lacco family / rebirth of the boats from 1970 onwards.

Leigh McNolty provided the second video of the East Gippsland Sailing Club Wooden boat Regatta held at Inverloch on the Australia Day weekend which had a large range of timber boats many of which had the first "wetting" for many years.

A light supper was provided and consumed during the evening and although the library was opened, no books were borrowed on the night.

The evening ended at 10:00pm, which shows the interest displayed in the videos.