The weather has been excellent over the Summer and Autumn appears to be living up to its reputation as ideal for boating on the Lakes and therefore we cordially invite all those with a passion for "messing around" in boats to visit and share with members from the East!

In February, Bernard O’Kelly and his crew set sail for the Hobart Wooden Boat Festival from Lakes Entrance. They were about 20 miles from Deal Island when Nellie was hit by a fast moving front. At first the topmast carried away at the spreaders which had recently been replaced. As the crew struggled with this, the boat was hit by another gust which brought down the complete mast, rig, sails and all rigging, with the boom landing on deck. Fortunately no-one in the crew was injured. The mast, sails and rigging were lost overboard and when Bernard started the engine, some of the ropes fouled the propeller. There was no radio as the aerial had been carried away with the rigging so Bernard activated the EPIRB. 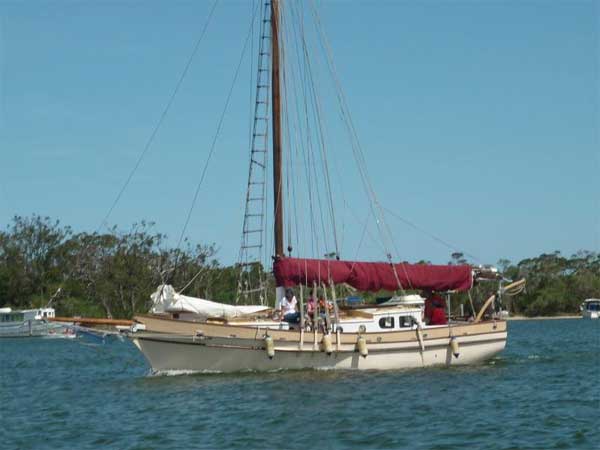 Eventually a large gas processing ship came into view and attempted to shelter Nellie from the large seas. This led to the ship and Nellie clashing a couple of times causing damage to the bulwarks. Overhead a rescue helicopter and fixed wing aircraft circled but the conditions were too dangerous to rescue the crew by this method. Finally at 2.00 am the water police from Paynesville arrived and began the tow back to Port Welshpool. During the tow, Bernard and his exhausted crew were able to take turns to get some sleep below. The tow lasted 9 hours and proceeded at a tortuous 4 knots. Back safely in Port, Bernard had to send a diver down to clear the rope from the prop shaft during their two week stay. It was found that the rope had melted around the shaft from the friction as they had tried to get under way during the storm.

After leaving Port Welshpool, Nellie motored to Refuge Cove and waited there for favourable conditions to make the passage back to Lakes Entrance and then on to Paynesville and home. Finally conditions gave a good following sea that provided a safe passage home. Bernard is now in the process of making a new 47 ft mast and 23 ft boom. Insurance has covered some of the costs and he now has a good stock of oregon with which to make the new mast.

He tells us there are some important lessons from the experience. Firstly, when undertaking such a voyage, a separate emergency VHF aerial should be carried. Secondly, when genuinely in trouble as Bernard and his crew were, don’t be afraid to fire up the EPIRB and lastly when approached by ships larger than yourself have plenty of fenders at the ready.

Our thanks to Bernard for giving his account of the incident and we hope that he is soon back on the water with all sails set.