The April Club night opened with apologies for a change of format as our Librarian, Allan Chinn, had found he was not as mobile as he had hoped in order to be able to set up the books as originally planned. Nevertheless in good WBA style, we changed tack and were treated to a video of the turning of Andrew Yen’s 25 footer on the previous Sunday. 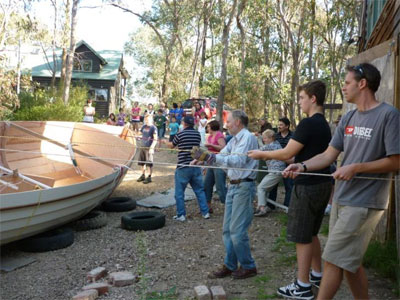 This was followed by a couple of segments from the set of DVDs on Home Boat Building by Alec Jordan. The DVD focussed on fitting out and finishing the hull. A suitable topic given that this is the stage Andrew’s hull is at present. The two segments viewed covered the process of fitting the inwale and outwale. Steve Clutterbuck brought in some books he had recently culled from his shelves at home for members to look over. Many thanks go to Andrew and Steve for their contributions to the evening.