A good crowd of around twenty members attended the June club night. Rick Mitchell was introduced by president, Andrew Cohen. Rick opened his presentation with a little background on the manner in which he had acquired his skills as an outcome of some experimental archaeology. A suit of sails for the Duyfkin was one of his adventures which required some research that took him to the Vasa Museum in Sweden for information on 17th century sails. 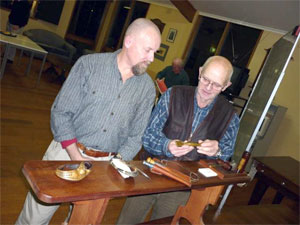 A display sail showing the difference between 17th century and 19th century sails was interesting, made more so by Rick‟s humorous explanations of the different purposes that ships were sailed for in the two centuries.

The audience was then treated to a display and explanation of the sailmaker‟s toolkit, including his bench. It was interesting to learn that there are two different palms, one for seams and the other for sewing on rope. There were other terms and tools explained including needles, threads, fidds and palms. Rick then challenged his audience as to why when so many build and sail their own boats they do not make their own sails too. There are three joys in sailing. First to sail a boat that you have built; second sail using a set of sails you have made yourself and third, to beat the other boat.

Rick explained some of the issues involved in cutting and sewing the cloth to make an efficient sail. He summed up the concept of tradition in boat building, sail making and sailing as being how we know what works.

It was a fascinating and informative evening that finished with a list of sources for tools and materials that will be useful to many of the members.

Andrew Cohen thanked Rick at the end of his talk on behalf of the those in the audience.