What we did over Easter 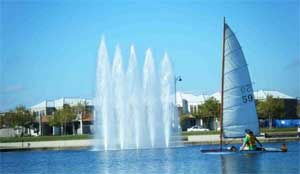 Many of the WBA members were to be found on the water over Easter, or working on their boats.

The weather was kind, for the most part, and many of us took advantage of the last of the warm weather to remind ourselves of why we love messing about in boats. 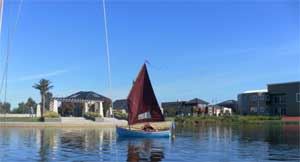 Rob Ripley and I took Lindsay Symons and my Moth to the Pakenham Lakes for a sail. We had a great day although it was almost drift conditions. I always figure that you learn more about sailing on a quiet day than you do in windier conditions.

After we pulled the boats out at the end of the day we were told that the public are not allowed to sail there unless you are a member of the so-far non existent sailing club.
I have also been making some additions to Ursa in the form of a watertight tank/storage locker up in the bow. It was a fiddly job as it had to be light, removable and fit very neatly to the inside shape of the bow section. It is now finished, bar the varnishing. Now that's done the next project is getting on with the restoration of Sundance, the 1973 NS14. Really looking forward to finishing that. It has an extremely beautifully shaped hull (my opinion anyway).

When will I ever get time to work on my old Rover?

Lindsay Symons on Holiday with Robert and Pat. 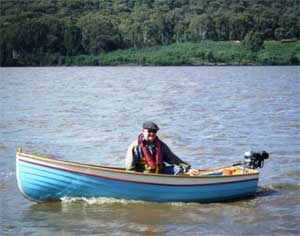 Lindsay Symons came with us for a week in country Numurkah. Robert launched her on Lake Mulwala one afternoon for a brisk sail. On another occasion we arrived at Lake Sambell, Beechworth, early on a Sunday morning. Here Robert had a sedate sail, and a romantic row through the mist with a backdrop of silence, pine trees and morning walkers. Our way home was via a full and windy Lake Nillahcootie where the "trusty" Seagull assisted progress across the choppy waves. The next stop at Boonie Doon was just for a photo opportunity to record the water flowing under the bridge from Lake Eildon once again.

It was a quiet Easter for the Batchelors, at least with regard to sailing. Peter and William did manage one day on the water, in Andrew Cohen and Chris Kelly's Golant Gaffer. We had previously visited Blunts while the boat was hauled out and the bottom scrubbed, but this was the first time we had seen her on the water. The boat is tied up on the SeaWorks pier at Williamstown, so we were able to park in their carpark and stroll along the pier to meet Andrew. A pleasant couple of hours ensued, working out what went where, and then we took her for a quick shakedown sail the the light breezes of the early afternoon. Apart from a quick clamber to the end of the bowsprit to free a jammed furler the sail went without a hitch, and I'm sure that Chris and Andrew are going to have many enjoyable days on her. 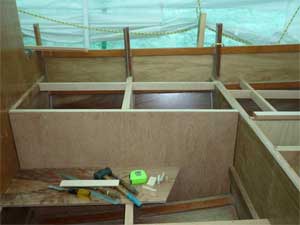 Work has been progressing on the crabber over the past few months. The well deck in the bow has now been fibreglassed and awaits painting.

The framing for the fore deck back to the cabin is complete with knees and plank to take the mast tabernacle.

The rear deck and cockpit have now been framed and at present the lockers in the cockpit seats are being finished. 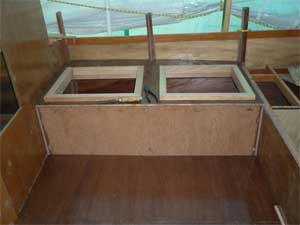 The cockpit floor is temporarily in place, which means I will no longer be skinning my shins on the central beam!