A great time was had by those of us who went to the Wooden Boat Festival in Hobart with over 600 boats entered. Barry North on Peace Train with crew Doug Gullikson and Billy Errikson on board sailed down, taking 2 weeks to get there via the Islands. 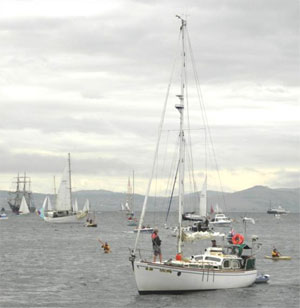 At the time of writing, Barry was still down there even though the weather was terrible.

This was Barry”s 7th Festival

Bernard O'Kelly on Nellie and his crew also sailed down, doing the island hop on the way. Nellie is now back home.

Smooth sailing to all and a great 2011
Jenny North,
President, EGWBA 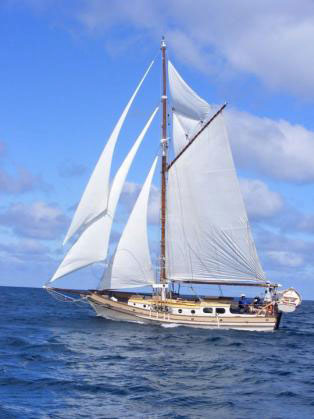 Nellie sailed to Hobart with Peace Train, having a great sail and favourable winds. Nellie returned on her own in adverse or no wind.

The Wooden Boat Festival being over, and after stocking up at Bellerive, it was down the Derwent and through the Denison Canal to Maria Island. She was delayed for four days in Triabunna while a storm front with up to 50 knot winds passed over. We were of course forced to test the quality of their fish & chips and the pub meals. The hot showers available were also well used.

After this the southerly swell remained, with the NE winds superimposing a smaller swell making it most uncomfortable at times. Further evenings were spent at Wineglass Bay, Binalong Bay [St. Helens] and on to Preservation Island and Roydon Is.[N end of Flinders]. So these were all day sails, but from Flinders Island to Lakes Entrance is a day and a night. When crossing Bass Strait the winds died altogether, ending with Nellie ghosting over the Lakes Entrance bar in misty rain which continued until Nellie was moored at Paynesville. So it was a wet finish to the 13 day trip.

Regrettably the “iron sail” was used the whole trip with assistance from other sails which were raised and lowered under the supervision of Captain Bernard (Bligh) until the crew became proficient. Nellie has a great galley which was very effectively used by the various chefs. We had a great stock of food. We saw magnificent flying displays of sea birds as well as dolphins and seals. 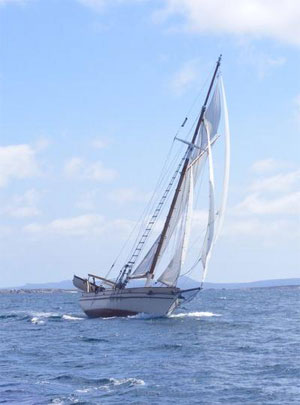 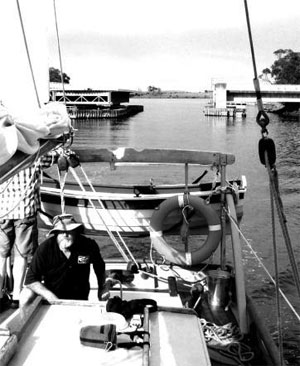