2011Looking out of the window on Sunday morning you could have been excused for thinking that boating and sailing was out of the question. It was pouring with rain. However, some intrepid WBA “boaties” packed up their boats, and headed for Rye. Well, I am glad we did, because on arrival at Rye the rain had stopped, the horizon had started to lighten up, and the breeze was light and steady (at least as steady as it ever is at Rye). 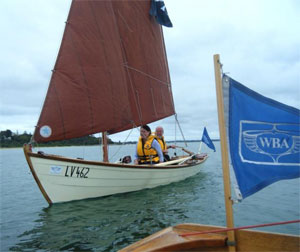 By the time Linda and I arrived at the car park with Ursa, Geoff and Jill were already getting Bluebelle rigged up, Steve and Chris had the newly renovated Fireball ready for its first launching and Paul and Karen were on the water in Beth and sailing beautifully. It was not long before Rob and Pat arrived towing Lindsay Symons with Rob’s canoe on top. Frank and Sue joined the gathering with their Hartley 18.

We had the pleasure of the company of some members without their boats. Brian and Robyn Flewell-Smith were staying at Rye for a week to explore the area and Maureen and Lawrence Marshall, now living at Rosebud, took the opportunity to spend some time with their “city cousins”. Peter Braithwaite and Bob Gunter also made it down and Andrew Cohen arrived in good time to have fish and chips on the beach.

Paul and Karen invited Rob, Julia, Sam and Lina to join the outing and we are hoping that Rob will become a member of our club. Rob has written a book called “Something About Navigator”, which is a delightful book about the Welsford Camp Cruiser – “the story of a happy boat, or so it seems to me”, (Rob’s comment in the book). He has kindly donated two copies to the WBA library for our enjoyment. 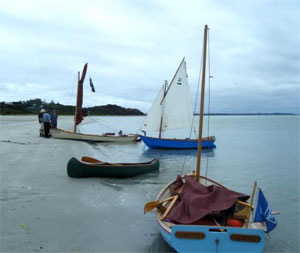 In the few years that we have been members of the WBA, Rye has never failed to come up trumps, even though the Melbourne weather makes the attempt to stop our group from attending the event. Thank you to everyone who ignored the “apparent” weather conditions and made it a great day – as always!

My apologies if I missed anyone out, it’s not easy to remember everyone’s names after the event !
Tony & Linda Remington (default OOD )