A Trip to Hollands Landing 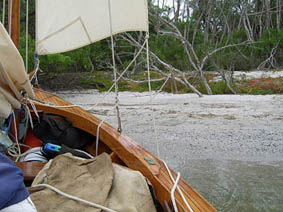 So what are we to say of it?

A Soldier's reach in both directions with no splashes but Begonia bustling along at near her best most of the time. An early arrival home and my lady happy.

Well, yes it was – and let me tell you of one little incident that highlighted the trip.

Let me tell you about Samson the swan.

We had departed early from Hollands Landing slightly anxious that the return could be long and difficult in the forecast fickle winds and threatening thunderstorms. Breakfast was completed and we packed the boat while watching dolphins sporting in the still waters of the channel. 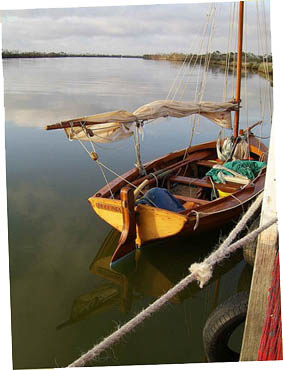 It was a light wind at first but quite sailable (especially for a light-air witch like Begonia) and the current out of McLennan Straits spat us well into Lake Victoria. The following trailer-sailer had no hope of catching us under sail and was left stuck far behind. The breeze built but not too much and the sailing was so easy that first my lady slept and then she snored. She avers that it must have been Begonia herself - who was by that stage truly snoring along.

Oh well, things were so good I’ll not quibble.

About half way back we had got along so well that a beach stop behind Waddy Point for lunch seemed in order - especially as the weather up at distant Paynesville didn't look welcoming - grey and rainy and building to a thunderstorm.
In the relatively tideless lake it was a simple matter to drop the main into its lazyjacks and nose up to a fat little white beach (Fat? Well other parts of the shore looked lean and nasty with snags) and anchor there in the light wind with the jib holding her ashore.

As we were breaking out the stove and instant noodles (and wine) we noticed a distant swan paddling leisurely in our direction. He got to us as the rice crackers were broached. He (How do you sex a swan anyway? He/it had beautiful clear red irises. We jtust assume maleness) seemed to like our crackers – if they were broken small enough. A jellyfish drifted alongside that was so clear and translucent you could see only its inner parts. It wasn't until Sue prodded it with a bit of biscuit that she realized its true size.

Though the swan learnt to take from my fingers a surprise movement would evoke a fluked neck and a hiss. Samson (as my lady discerned to be his name) stayed around all through lunch, preened himself and did swan things until we left, then watched us go.

I shortly found a Flying Fifteen to play with. This little racing keelboat is not fifteen feet long (about our length) - that's its waterline. it's really twenty feet long. Never-the-less in the lighter patches he struggled to get past us - and I enjoyed myself making him struggle harder.

So passed the second half of the retum and we arrive back in busy Paynesville to find the rain all cleared away. We were so rested and revived that the drive back to Melboume was a doddle' in the long sunny summer's evening. 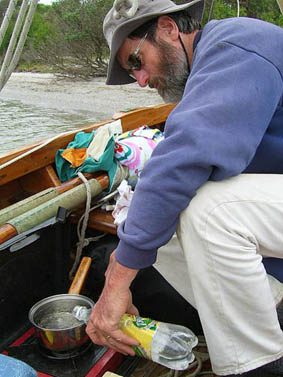 Just to fill in the rest of the weekend's story I should like to mention the outward trip to Hollands Landing. It was mostly a one reef reach in flat water, apart from the power boat wakes which Begonia competently splashed aide. It went light at the end which added to the charm of the sunset for me but my usually equable lady was rather more excited than patient. The exuberant welcome of other wooden booties who had gathered earlier and who providentially had plenty of chicken and salad left delightfully complemented the idyll.

After tea and cake (and some red) we barricaded ourselves in the tent for the night and let the mossies do their worst outside.

However, the real story of the trip started for me a week earlier as I prepared Begonia. I wanted her ready for anything - even though I intended only to sail if the weather promised to be benign. I wanted all her rigging and systems to be effective, convenient, friendly and above all I wanted her secure against disaster.

To that end I did many little things, but the major ones were fitting and securing adequate buoyancy, ensuring the rudder and tiller couldn't fall off - and generally organizing the reefing and sail handling systems so that ‘changing gears’ was easy and positive. I did not want to get caught out having to muck around in desperation trying to retrieve some calamitous situation. I certainly wanted to avoid getting into any dramas which stressed or seriously inconvenienced my lady.

By the end of that prior week I was reasonably satisfied with my preparations andi mprovements. Yet, things didn't all go swimmingly. It took an inordinate amount of time to pack before getting away so that we pitched the tent in the dark (not a serious inconvenience in my estimation - and fish and chips with a beach sunset offset even that). 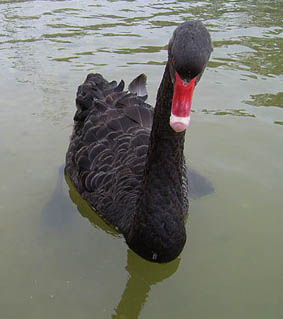 Having a car window shatter all over my lady out of the blue, for no reason, as we set off to launch the next morning proved only a minor hiccup.. . . back to the Bairnsdale wreckers and I fitted a replacement that I didn't even have to remove; someone had already taken one out and left it.

So even such mishaps couldn't really mar our weekend. We seemed to be cocooned by God's good graces.

Perhaps that's what attracted Samson and the jelly fish.