Overseas wanderings of a peripatetic couple 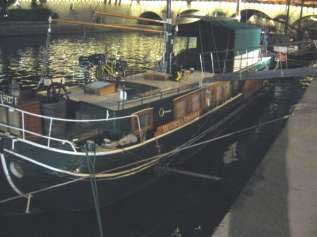 Gliding silently along the peaceful canal, green fields in the distance, poplar trees and birch forests along the bank, the beautiful black barge finally reached the next lock. The lock-keeper emerged from his cosy cottage and ambled over to operate the mechanism that would close the gates and fill the lock, allowing the barge to continue upstream. This mechanism has been faithfully operating for hundreds of years although the barge has undergone a transformation from carrying grain and other cargo to sumptuous accommodation for six wealthy guests and crew. The upper deck is a sun deck complete with deck chairs and potted geraniums giving a bright summery display. As the barge passes on its way the lock-keeper returns to tend his productive veggie patch, a ubiquitous feature of every lock along the canal. Summer is very precious and no time is lost in providing produce for the families living there.

Great lumbering 'bateau mouche' plough their way along the Seine carrying hoards of tourists both day and night yet just around the bend from Pont Neuf we saw beautiful colourful Dutch barges fitted out to accommodate a family and complete with gardens of vegetables on the upper deck. Alternative lifestyle living means that one can just cast off and explore all the nooks and crannies of the European water systems while maintaining all the comforts of home. A visit to the Maritime Museum in Trocadero was an opportunity to see fabulous model boats up to 400 years old, exquisitely detailed to the last pulley; mostly made of wood but some of ivory and even silver.

Often in the Club one sees the wives and friends tagging along to support their passionate spouses whose love of boats in all shapes and forms is so apparent. I suppose I fall into that category on occasion too. However, on this trip I stood in wonder at the beautiful sights that we discovered by following the 'nautical' path and gained a new insight into the boating fraternity.